The economics of hunting in Minnesota

Published on December 20, 2010 under Media Clips

The Marshall Independent
By Per Peterson
November 30, 2010

Hunting Works for Minnesota is new to the scene and wants to spread the word about the impact hunting has on the state’s economy. 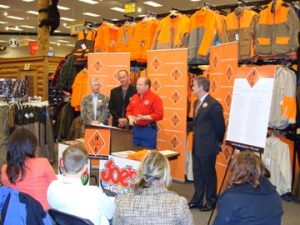 Its name says it all and it has the numbers to prove it.

Hunting Works for Minnesota hasn’t been around long – since October – but driven by nearly 100 partners around Minnesota, it’s already become a powerful voice and advocate for the outdoors. A collaboration between a number of businesses in Minnesota, including restaurants, hotels and motels, resorts, gas stations, and convenience stores, and hunting and shooting groups, Hunting Works for Minnesota’s goal is a simple one – to let people know just how much hunting and shooting sports mean to the economic engine that drives Minnesota.

Four local businesses in Marshall – Borch’s Sporting Goods, County Fair Foods, Mike’s Cafe, and Runnings Farm and Fleet – along with the Marshall Area Chamber of Commerce and the Marshall Convention and Visitors Bureau – are partners of the group, which also has branches in North Dakota and Arizona.

Marshall Area Chamber of Commerce Executive Director Cal Brink serves as one of Hunting Works’ co-chairmen along with Ron Schara, Brian Steinhoff, president of the Minnesota Retailers Association, Greg Larson, owner of Ace Hardware in Redwood Falls, and Mark Johnson, executive director of the Minnesota Deer Hunters Association. Brink said the group is non-political and strives to educate people on the economical impact hunting and shootings sports has in Minnesota.

“There are partners literally from across the state of Minnesota that, at this point, have decided, ‘we want to partner with Hunting Works for Minnesota because we believe in what it does economically,'” he said. “We want to educate people that there are some very positive things about hunting and shooting sports in Minnesota. We want our kids and grandkids to be able to do the same things we did when we were kids and go out and be able to hunt. Hunting is part of our heritage, but the deeper side of that is the unbelievable economic impact on Minnesota if we didn’t have it.”

Chad Wyffels has been with Borch’s Sporting Goods in Marshall since 1975. Since opening in Marshall in 1963, Borch’s, once known as Poor Borch’s before its move to a new building down the street on East College Drive, has been the place to go for hunters in and around Marshall. Wyffels said the business of hunting has increased throughout the years, especially when summer starts winding down.

“I would say around the first of August, people start getting in the mood to start getting ready for hunting,” he said. “We have a sportsmen appreciation sale that kicks off in the middle of August; we go to seminars, we have reps come in. We kind of rearrange the store over the hunting season.

Hunting, shooting sports and fishing have served as the backbone for Borch’s since its inception and, as Wyffels says, the store has almost everything covered when it comes to the outdoors – from bows and arrows, to shotguns, to ammo and camo, and fishing equipment.

“We have the basics pretty well covered,” he said. “I think hunting is a big part of the local economy as well as the state, as far as the amount of revenue it brings into the state with sales tax, lodging, the whole works. People travel and buy gas, they buy equipment. It’s definitely a vital part of the economy.”

While hunting and fishing has long been the cornerstone at Borch’s it has radically changed the retail landscape at Runnings Farm and Fleet stores around the state.

Runnings stores have always been known for selling farming-related equipment, but have branched out significantly because of hunting and fishing. While it doesn’t sell shotguns and ammunition yet, the impact outdoor sports has had on the store is obvious. Runnings in Marshall has about two dozen fishing houses on the floor and sells deer stands. Runnings also sells blaze orange and camo garb, as well as other outdoors clothing, ice augers and other outdoor-related items.

“We’ve grown so much that people are used to coming into our stores now saying,’ it’s nice to see Runnings grow in this area,'” said Gary Becker, owner of Runnings in Marshall. “I also see a lot more women that come in with their husbands. It’s become more of a family-type thing, especially with the younger kids and the ladies now. And they’re not just regional people, either.”

Not only is hunting and fishing a huge part of Minnesota’s heritage and culture, Brink said hunting and shooting sports creates millions in state revenue each year.

According to numbers provided by Hunting Works, hunters support more than 14,000 jobs in Minnesota and generate more than $360 million in salaries and wages. With nearly 600,000 hunters taking to the fields, marshes and lakes each year, annual spending by hunters in Minnesota has grown to the point where it’s exceeded $480 million. The average Minnesota hunter spends more than $780 per year, and hunters generate about $64 million in taxes for the state of Minnesota.

Brink said outdoors and gaming retail has created a ripple effect in the state’s economy.

“When you think of the typical hunter, they spend about $780 on their sport, and that’s probably a minimum,” Brink said. “You take one trip and go someplace, you have hotel fees, when people come here to hunt they eat three to four meals a day, they shop. That’s the ‘ripple effect.’ The unknown ‘ripple effect’ is if the hunters are men, their wives are often spending money on something, too. For our community, we have 385 hotel rooms and some of those big hunting weekends, we have probably 150 to 200 rooms that have hunters in them. They also eat and they shop. Plus, we’re far enough in the middle of no place that they fill up with gas before they leave, and when they get here they need gas.”

Geographically, southwest Minnesota is adjacent to some of the best pheasant hunting in the Upper Midwest. Brink said it’s no secret that plenty of Minnesota hunters go across the border to hunt pheasant in South Dakota. And while that’s inevitable because of the high number of birds in South Dakota year in and year out, there are a couple reciprocating effects that occur between the two states.

“We give up some of those dollars to South Dakota; the reciprocating effect might be the fishing in Minnesota,” Brink said. “We talk mostly about hunting, but we certainly get a lot of people from South Dakota who come over here to fish. It’s kinda like going fishing in Canada – you get hooked on fishing in Canada and come back to Minnesota the rest of the time. There are people who come over here from the edge of South Dakota, Nebraska, to pheasant hunt as well. Depending on our weather conditions and the hatch, there are times when people come here from other states because our bird hunting is better.”

Mark Johnson, executive director of the Minnesota Deer Hunters Association, said the current economy is playing a part in keeping the average hunter closer to home.

“I know the average Minnesotan doesn’t go there to pheasant hunt; they pretty much stay in Minnesota,”?he said. “I?think what we’re seeing in this economy is people are looking at places closer to spend their money so they get more for their money locally. They don’t have to travel as far. Maybe they don’t see as many birds, but it doesn’t cost them nearly as much and they can justify it easier with their spouse.”

“I hear some local people say, ‘yeah we go out to South Dakota,’ but I don’t hear that as much as I used to,”?said Becker. “Even if they do go somewhere else for a weekend, they’ll spend money here in Marshall – they’ll pack up with everything they need like their food and beverages.”