By LaDonna Seely
In Minnesota, hunting is big business. In Minnesota, hunting is good business. That was the message at the Oct. 26 launch of “Hunting Works for Minnesota” (www.huntingworksformn.com), a conglomeration of small business owners, retailers, non-profits, chambers of commerce and visitors bureaus, brought together by their support of the hunting industry throughout the state.

Speakers at the kick-off discussed how the state’s economy, traditions and environment benefit from hunting and shooting enthusiasts. According to the Congressional Sportsmen’s Foundation, 597,000 people hunt in Minnesota each year, spending an average $783 dollars per season to pursue their passion. That’s more than $480 million dollars spent on lodging, food, gas and gear, while paying more than $63.8 million in state taxes. 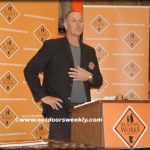 Cal Brink, the Executive Director of the Marshall Area Chamber of Commerce and HWFM Co-Chair said the ripple effect of each hunting season means a lot to a town like Marshall where they are working hard to fill hotel rooms and attract shoppers each weekend. “The $482.6 million dollars spent by Minnesota hunters each year is one-third the cash receipts from corn, one of the state’s top agricultural commodities. In the overall picture of Minnesota’s economy, that is a really big deal,” said Brink.

That ripple effect equates to jobs too. “Many people don’t understand the cause and effect relationship hunting has on Minnesota’s economy,” said Brian Steinhoff, Co-Chairman of HWFM and President of the Minnesota Retailers Association. “Hunters directly support more jobs in Minnesota than many of the state’s biggest employers – over 14,400 jobs. Thousands of more jobs are supported indirectly.”

Greg Larson, Co-Chairman of HWFM and owner of Larson’s Ace Hardware Store in Redwood Falls said his family’s hunting traditions drew him to the organization. “As a small business owner who sees a lot of hunter traffic in my store, I am excited to work with the other partners to explain the key role that hunting plays in Minnesota’s rich heritage as well as in its economic health,” Larson said. “I want to make sure we preserve our Minnesota heritage of getting out in the fresh air with our family and friends. For excitement, hunting has always provided the most bang for the buck and it always will.”

Mark Johnson the Executive Director of the Minnesota Deer Hunters Association and HWFM Co-Chair discussed the contributions hunters make to preserving wildlife habitats and the environment. “Different stamps are earmarked for species management, habitat restoration, rehabilitation and acquisition,” Johnson said. “For example, 98 cents out of every dollar generated by the sales of Federal Duck Stamps goes toward the purchase or lease of waterfowl habitat and wetlands.”

Hunting Works for Minnesota was formed, in part, as a response to the growth of politically motivated, anti-hunting groups across America that would like to limit, make more expensive, or ban hunting altogether. According to HWFM, “The actions of these groups are eroding our heritage and damaging state economies and local businesses that depend on hunters for their livelihoods. All this is occurring at a time when hunter numbers are declining and we are facing tough economic times.”

The newly formed Hunting Works for Minnesota partnership has more than 86 partner organizations and hopes to add dozens more in the future. The grassroots members are advocates for public policies that support jobs and economic prosperity, while touting the role that hunting and the shooting sports play in both the heritage and economic health of Minnesota.