Published on October 27, 2010 under Media Clips

A new partnership that brings together Twin Cities and outstate businesses and groups that support hunting — and benefit from it economically — has formed to promote the sport and its importance to Minnesota.

Called “Hunting Works for Minnesota,” the coalition’s leaders announced at a Tuesday news conference at Joe’s Sporting Goods in St. Paul that — while it is nonpolitical — it intends to “weigh in on hunting-related issues that impact Minnesota jobs.” 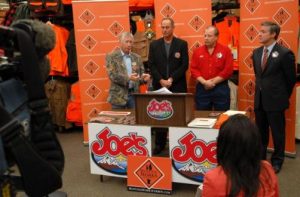 “Hunting is important to Minnesota,” said Cal Brink, executive director of the Marshall Area Chamber of Commerce. “Hunters spend more than $480 million each year in Minnesota, supporting 14,400 jobs and $365 million in salaries and wages.”

Brink was joined by Mark Johnson, executive director of the Minnesota Deer Hunters Association, Brian Steinhoff, president of the Minnesota Retailers Association and Greg Larson, owner of Larson’s Ace Hardware in Redwood Falls, in announcing formation of the group, whose web site is www.huntingworksformn.com. More than 100 businesses and sporting organizations have joined, from motels and restaurants and convenience stores to Pheasants Forever.

Hunters spend an average of $780 apiece in the state each year. “Those dollars are too big to ignore,” Johnson said.

Startup costs have been provided by the National Shooting Sports Foundation, a coalition of firearms, ammunition and related manufacturers. Similar groups are forming in other states.