(St. Paul, M.N.)  – A broad group of local and regional leaders representing Minnesota sporting organizations, small businesses, and retailers today announced the launch of the Hunting Works for Minnesota partnership.  Stressing the major impact hunting has on Minnesota’s economy, the organization pointed to sportsmen and women as key drivers of in-state commerce.

“Hunting Works for Minnesota and its members will advocate for public policy which supports jobs and economic prosperity,” said Greg Larson, Co-Chairman of HWFM and owner of Larson’s Ace Hardware Store in Redwood Falls. “As a small business owner who sees a lot of hunter traffic in my store I am excited to work with the other partners to explain the key role that hunting plays in Minnesota’s rich heritage as well as in its economic health.”

According to the Congressional Sportsmen’s Foundation, each year 597,000 people hunt in Minnesota, spending over a $480 million dollars on lodging, food, gas, and gear while paying over $63.8 million in state taxes.  To put this in perspective, the taxes paid by hunters could pay 1,600 Minnesota teachers’ salaries or fund the annual education expenses for 7500 Minnesota students.

Ron Schara, Co-Chairman of HWFM and host of the Television show Minnesota Bound, applauded Hunting Works for North Minnesota for shining a spotlight on the economic benefits derived from hunting in Minnesota.  “Ask any hunter, the guns and ammunition are probably the least expensive parts of hunting and the 11% excise taxes paid on them go right to the state fish and wildlife agency and are used for wildlife conservation,” said Ron Schara who passionately supports the heritage of hunting, “A hunt starts with purchasing a license and most of those proceeds go to fund wildlife in Minnesota.  Then, hunters buy gear from local sporting goods retailers and parts of those proceeds go to fund wildlife in our state through the Pittman Robertson Act which is the key funding driver for conservation projects statewide. Hunters also stay at hotels near their favorite hunting spots, fill up at the local gas stations and go to local convenience and grocery stores to fill up their coolers for a day in the field.  And if the hunter is a good shot after the hunt game has to be processed and then we like to share stories and even brag a little at local diners and watering holes.”

According to HWFM this pattern of spending happens all over the state, with each hunter spending on average $783 dollars per season to pursue their passion.

“Many people don’t understand the cause and effect relationship hunting has on Minnesota’s economy,” said Brian Steinhoff, Co-Chairman of HWFM and President of the Minnesota Retailers Association.  “Hunters directly support more jobs in Minnesota than many of the state’s biggest employers – over 14,400 jobs. Thousands of more jobs are supported indirectly.” 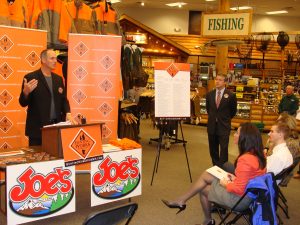 Cal Brink, the Executive Director of the Marshall Area Chamber of Commerce and HWFM Co-Chair added that, “According to the Congressional Sportsmen’s Foundation, the $482.6 million dollars spent by Minnesota hunters each year is one-third the cash receipts from corn, one of the state’s top agricultural commodities. In the overall picture of Minnesota’s economy, that is a really big deal.”

The newly formed Hunting Works for Minnesota partnership has more than 86 partner organizations and will be adding dozens more in the weeks and months to come.  The effort is being supported by sporting organizations such as the National Shooting Sports Foundation.

“The HWFM partners have an important message to share with Minnesotans about the economic benefits of a strong hunting community,” concluded Mark Johnson the Executive Director of the Minnesota Deer Hunters Association and a HWFM Co-Chair. “Hunting specifically supports thousands of jobs, both rural and urban, across the state of Minnesota. Our goal is to unite stakeholders all over the state so that our voice will be unified and our message will be amplified.”

The HWFM partnership will monitor public policy decisions and weigh in on hunting-related issues that impact Minnesota jobs.  Hunting Works for Minnesota will serve as a vehicle to facilitate important public policy dialogue and to tell the story of how Minnesota’s hunting heritage positively effects conservation and jobs throughout the state.

About the Hunting Works for Minnesota Partnership

Hunting Works for Minnesota is a local grassroots partnership of organizations focused on hunting and the economics derived from these activities.  HWFM members are advocates for public policy who support jobs and economic prosperity.  As a grassroots organization we explain the role that hunting and the shooting sports play in both the heritage and economic health of Minnesota.

Hunting Works for Minnesota was formed in part as a response to the growth of politically motivated, anti-hunting groups across America.  Many anti-hunting groups would like to limit, make more expensive and even ban hunting altogether.  The actions of these groups are eroding our heritage and damaging state economies and local businesses that depend on hunters for their livelihoods.  All this is occurring at a time when hunter numbers are declining and we are facing tough economic times.