New land in SW Minnesota proves to be a pheasant paradise, drawing in hunters and boosting area economy 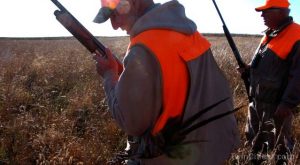 PIPESTONE, Minn. — We drove more than 200 miles from places such as Blaine, North Branch and Minneapolis — landscapes shaped by freeways and strip malls — to hike a piece of grassland in southwest Minnesota and flush a rooster pheasant.

For Allen Zaffke and his son Vince, 23, it was the autumnal renewal of a long friendship with Marty Wallin and his son Adam. Allen and Marty used to be neighbors in Coon Rapids, but in the mid-1990s, Marty yearned for the small-town lifestyle and moved to this prairie town just a stone’s throw from South Dakota.

“I love the small-town atmosphere and the environment. And I love to hunt pheasants,” said Marty, president of the Pipestone County chapter of Pheasants Forever.

And pheasant hunting was on tap Saturday, the opener in Minnesota.

Allen and Marty have watched their sons grow up in the fields of southwest Minnesota, tromping around for pheasants with their fathers. Even though they live in North Branch, the Zaffkes never miss a pheasant opener and a chance to hang out with the Wallins.

These sort of reunions occur by the thousands across the pheasant range in Minnesota, largely out of sight and without the fanfare of big sporting events of, say, a Vikings game. But the motels here were full Friday night with pheasant hunters, a testament to these traditions and the fact this region has the finest pheasant hunting in the state.

There was another reason I was interested in hunting pheasants in Pipestone County on Saturday morning.
At 9 a.m., when the season opened, we proceeded to walk across a newly purchased tract of public land with our guns at ready and hunting dogs roaming afield.

The Winter Wildlife Management Area, just outside of Pipestone, became 233 acres bigger late in 2009, courtesy of the Clean Water, Land and Legacy Amendment. It was the first WMA acquisition funded by the amendment, which was approved by voters in 2008.

Thousands of acres of wildlife habitat, many of it in the form of WMAs, are in the pipeline for funding from the Legacy amendment.

The Pipestone County chapter of Pheasants Forever significantly aided in the Winter acquisition by donating money and working with the property owner, Al Dubbeldee of South Haven, Minn., who sold the 233-acre parcel.

As it happened, Dubbeldee also was carrying a shotgun Saturday across the property he once owned but now is managed by the Minnesota Department of Natural Resources for wildlife habitat.

I asked him why he wanted to sell such a lovely chunk of native grassland, a pheasant hunter’s nirvana.

“I’m a strong supporter of Pheasants Forever, and it was a good fit for both of us,” Dubbeldee said. “For the guys who come down from the cities, it’s a wonderful place. They’ve got a spot to hunt because not everyone can get permission to hunt private property down here.”
His friend John Whipple, a Pipestone resident, agreed.

“It’s also about the economics of our region,” Whipple said. “We’ve got a new motel in town called The Crossings, and (pheasant hunting) helps fill it up. It’s all about economics down here in southwest Minnesota. We need every bit of help we can get.”

Marty Wallin said the 233 acres is the third addition to the Winter WMA that his PF chapter has helped funded since the late 1990s.

“We’re all conservationists and outdoorsmen in the chapter, and we think it’s great to have places like this,” he said. “It’s not for entertainment, but for conservation. Any time you put native grasses and wildlife habitat on the ground, you’re improving nature, your local water quality and preventing erosion. It’s a win-win-win for everybody.”

According to DNR records, Dubbeldee paid between $8 and $10 an acre in property taxes on the land before selling it. As part of the Winter WMA, the DNR will pay the county $17.25 an acre under a special state formula called Payment in Lieu of Taxes (PILT).

“It is typical for our acquisitions in this part of the state for DNR payments to be more than when (the land) is in private ownership,” said Wendy Krueger, DNR area wildlife manager for this region.

The tract wasn’t premium farmland, but hilly and erodible soil — another reason for it to be turned into wildlife habitat.

It was a popular piece of wildlife habitat, too, on Saturday.

Several groups of hunters crisscrossed the tract as we hunted with several Labradors and a German short-haired pointer. We flushed numerous pheasants and a handful of roosters, most of which busted out of the grass out of range.

But when Lowell Lorenzen — he with the 1960s vintage Remington 870 with the full choke — watched a rooster rise out of the grass, it took one shot to get our first bird for the day.

The day proved to be a tough one for pheasant hunting. It was extremely windy and the birds were jumpy, making it difficult to get close flushes.

But pheasant hunters know to bide their time, to wait until the cornfields are picked and snow graces the countryside, to find the best hunting.

Luckily, there is plenty of time to bide. The pheasant season closes Jan. 2.

Saturday’s opener was extremely windy and dry, but temperatures were good for both hunter and dogs. Many lowlands still have ample water from September’s rainstorms.

Cornfields are being harvested quickly, but in many fields crops were still standing, providing refuges for pheasants. The soybean harvest is nearly complete.

Southwest Minnesota typically has the highest pheasants counts in the state. There is no reason to doubt that based on Saturday’s results, but the better hunting will occur once the corn is completely harvested.

To find public hunting areas, reference any of the DNR’s public-hunting maps, available from the agency and from retail outlets.