A Minnesota artist has won the 2010 Federal Duck Stamp Art Contest for the fourth time. 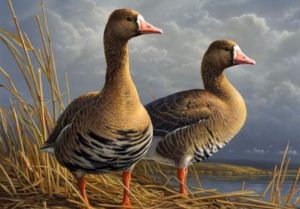 The U.S. Fish and Wildlife Service said Saturday that James Hautman of Chaska has been named the winner. He also won in 1989, 1994 and 1998.

The winning painting shows a pair of white-fronted geese standing in a marsh under gray skies.

The artwork will be made into the 2011-2012 Federal Duck Stamp, which goes on sale next summer. The stamp sells for $15, and raises about $25 million each year toward conserving wetlands.

Second place went to Hautman’s brother, Robert Hautman of Delano. The brothers were tied for first place after the final round of judging. James Hautman won the tie-breaking vote.